The Past and Present of Inland Waterways. Even though the nation’s inland waterways help facilitate the transportation of 600 million tons of freight each year, many of us still don’t know the history of waterways or how they’re currently maintained to keep things moving seamlessly. From their origin to how they operate to this day, let’s take a look at how they became an integral part of our nation’s infrastructure.

During the Colonial period, which lasted from 1607-1776, water transportation was virtually the only option for settlers to travel. Vessels sailed coastal and inland streams trading and communicating between settlements, and allowed pioneers to more easily move west. Settlers in Virginia and Maryland traveled the James and Potomac rivers while Pennsylvanians used the Susquehanna. Those in New England and New York most commonly used the Connecticut and Hudson-Mohawk rivers to travel south and west.

Even when road infrastructure began to expand, traveling this way was still expensive and dangerous. Large populations continued to settle near waterways in order to expedite travel and access. However, conflicts during the 18th century (which included the Revolutionary War) restricted some areas from accessing important rivers and waterways. The US obtained unrestricted access in 1803 with the signing of the Louisiana Purchase. 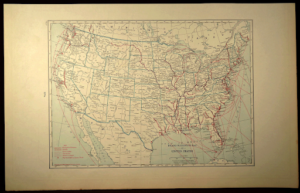 The nineteenth-century brought about two major developments that helped revolutionize inland waterways: steamboats and canals. Because previous boats used wind power, and the wind only moved downstream, adding steam power increased efficiency and reduced travel time. While the Canal Age (the beginning of which was marked by the Erie Canal in New York) only lasted about 25 years, it created over 4000 miles of canals that are still used as part of the current inland waterway system.

Although the advent of the railroad in the 1830s eclipsed the popularity of waterways, steamboating had already contributed to the country’s expansion throughout the West and to the Pacific Coast that happened well into the 20th century. In 1907, President Roosevelt created a plan to improve the waterway infrastructure. By this time, railways had become congested and the country was looking for an alternative. Marine technology like tugboats, special-purpose barges, and improved navigational systems expedited inland waterway reformation.

Over the course of the 1900s, the US government committed a growing amount of resources to help increase the traffic throughout the inland waterways. Projects like the Atlantic Intracoastal and Gold Intracoastal Waterways created protected barge channels that stretched from New England to the Florida Keys and as far west as Texas. Unlike in the past, these projects aimed to work in conjunction (and not in competition) with existing road and rail infrastructure.

Today, there are more than 25,000 miles of navigable routes on inland waterways, most of which consist of the Mississippi River and the connecting waterways. However, the Columbia River is the only one on the West Coast that is easily navigable due to steep grades and unpredictable flow make other Pacific Coast waterways hard for barge travel. There are also dams along the West Coast waterways to help support hydroelectricity production. The majority of the navigable waterways exist on the East Coast — the climate is wetter and the terrain is not as dynamic. 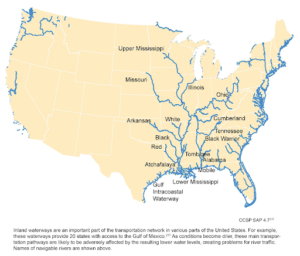 To keep waterways regulated and safe for travelers, the US has created a set of laws and guidelines to help determine which areas are “navigable”. The Army Corps of Engineers use a list of criteria and factual determinations to help those who depend on barge transportation to create safe and efficient freight routes.

The Army Corps of Engineers is also responsible for the maintenance and care of 12,000 miles of the inland waterways, including a majority of the commercial waterways. Operators that travel along these stretches pay a fuel tax that funds new construction and rehab of the waterway infrastructure. Additionally, since the 1960s there has been over $3 billion invested in the modernization of the inland waterway system to help keep barge freight moving along. There are also ongoing studies being conducted to see how this investment will help boost sustainability in supply chains as organizations look to reduce their carbon footprint and freight costs.

Just as it’s important to maintain the waterways, barges also need to be updated and well maintained. Working with a waterway marine supply distributor with experience helps ensure you’re outfitting your barge fleet with top-quality modifications that boost efficiency and offer a return on investment. Archway Marine Lighting is committed to delivering a high-quality product along with prompt, friendly and professional customer service. We take great pride in our ability to provide our customers with products they need, when they need it and at prices that are very reasonable. We are here to serve you and enjoy hearing from you.