It’s not often that inland waterways make mainstream news, but Egypt’s Suez Canal has been showing up in plenty of headlines lately. The artificial canal that connects the Mediterranean Sea to the Red Sea makes up part of the Silk Road that facilitates travel between Europe and Asia and is a major factor in global trade.

Once just a topic in grade school history books, the recent shining spotlight on the Suez has reignited conversations about the history of the canal and the future of inland waterway shipping and navigation. As an industry, this should be a wake-up call to push for more investment in waterway and maritime logistics infrastructure; canals and waterways like the Suez have long been integral in trade and will continue to be for generations to come.

Throughout ancient times, several west-east traveling canals were created to make travel and shipping easier between the Nile River and the Red Sea. Around 200 BC several Egyptian pharaohs oversaw the construction of these canals, and several subsequent leaders and explorers built upon that initial construction.

This continued for nearly 4,000 years until Napoleon’s reign. The French Emperor brought an idea to the table that would create a north-south canal between the Mediterranean and the Red Sea. While his plan was costly and time-consuming, the idea of this north-south canal remained alive with experts invited to evaluate the feasibility.

A plan was fleshed out in the mid-1800s and French diplomat Ferdinand de Lesseps established The Suez Canal Company to oversee the construction and maintain control of the canal for 88 years from the date of completion. Excavation of the canal began in 1859 and has been reported as being a dangerous, controversial, and highly contested project from start to finish.

The inaugural trip through the Suez Canal happened in November of 1869, and while there was much fanfare to celebrate, the finished project was far from what its creators had envisioned. Lower-than-expected travel increased the financial burden of the canal, and there were still political and technical challenges in place. Despite all of that and lingering questions about control, the canal had a near-instantaneous and positive effect on world trade.

The canal was mired in world diplomacy conflict for the next century or so, fueled by local and global unrest. From 1956 until 1979, the Suez Canal was also the backdrop for several historical, global events including foreign military attacks, territory disputes, closure, and even peacekeeping by the UN. 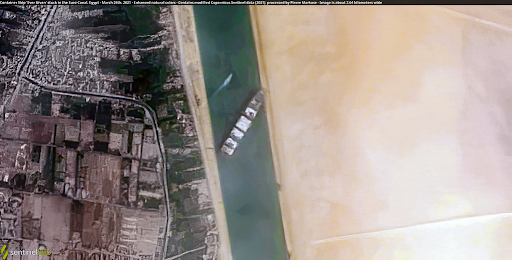 Things in the Suez remained relatively quiet until 2021, when the container ship Ever Given ran aground, blocked the canal, and created a supply chain headache of epic proportions. The obstruction lasted 6 days and stopped global trade from entering or leaving the canal. Economists were relieved that it didn’t last longer, predicting that it would have crippled global trade for months or even years to come. As it stands, the obstruction cost hundreds of millions (if not billions) in damages and delayed goods, and the supply chain will inevitably feel some ripples.

There was really no predicting that the Ever Given incident would happen, and it has many organizations taking a closer look at their shipping methods and many are sounding the call to improve aging maritime and inland waterway infrastructure across the globe. They are asking questions about how one ship can hold up trade across the world, and how to improve logistics to future-proof their processes.

It’s still unclear as to how long the supply chain will be recovering from the Ever Given, but there are ways to drive progress to mitigate the risk that something of this scale happens again. Other major ports and waterways scrambled to protect their navigation routes and facilitate access for other methods of shipping like rail or truck. Organizations are beefing up warehouse storage space to increase inventory capacity should the supply chain come to a standstill again.

Of all the lessons we can learn from the Suez Canal, it’s that we should never underestimate the role that waterways have on the way we do business. From its ancient history to its future role in global trade, it can serve as a model and real-world case study.